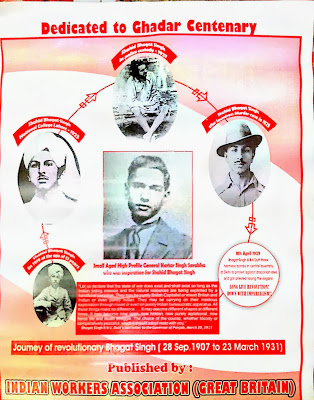 This calendar designed for Indian Workers Association (G B).
It represents how the revolutionary  ideas of Bhagat Singh evolved with  Gadar Party ideology and spirit of Kartar Singh Sarabha in the centre.

Posted by Shahid Bhagat Singh Reasearch Committee at 11:10 AM No comments: 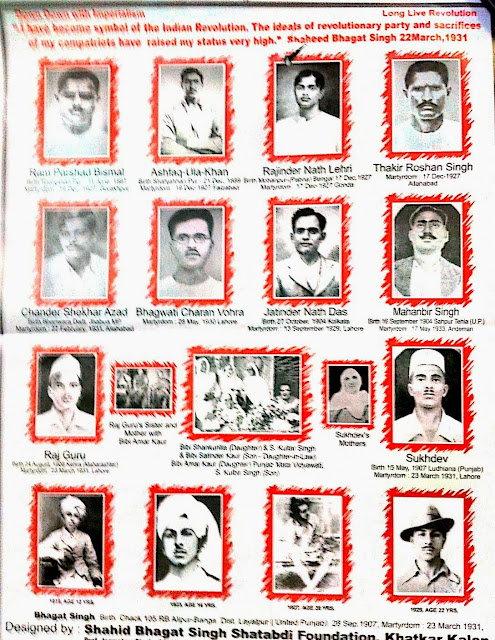 This is a calander which gives an integrated look to Martyrs of Hindustan Socialist Republican Association along with a tribute to three mothers of Martyr rajguru , Bhagat Singh and Mother of Sukhdev.

" I have become symbol of the  Indian Revolution . The ideals of revolutionary party and sacrifices of my compatriots has raised my status so high,"
Then you see the growth of Shahid Bhagat Singh from age 12 to 21 year. All are original photos.

Posted by Shahid Bhagat Singh Reasearch Committee at 3:44 AM 3 comments:

"CRUX OF IDEAS" of Bhagat Singh

Crux of Ideas
From statement in Assembly Bomb Case
" We humbly claim to be no more than serious students of the history and conditions of our country and her aspirations. We despise hypocrisy, Our practical protest was against the institution, which since its birth, has eminently helped to display not only its worthlessness but its far-reaching power for mischief. The more we have pondered the more deeply we have been convinced that it exists only to demonstrate to the world Indian's humiliation and helplessness, and it symbolizes the overriding domination of an irresponsible and autocratic rule. Time and again the national demand has been pressed by the people's representatives only to find the waste paper basket as its final destination."

From High court statement in above case
"  In our statement we explained in detail what we mean by "Long Live Revolution" and "Down With Imperialism". That formed the crux of our ideas. That portion was removed from our statement. Generally a wrong meaning is attributed to the word revolution. That is not our understanding. Bombs and pistols do not make revolution. The sword of revolution is sharpened on the whetting-stone of ideas. This is what we wanted to emphasise. By revolution we mean the end of the miseries of capitalist wars. It was not proper to pronounce judgement without understanding our aims and objects and the process of achieving them. To associate wrong ideas with our names is out and out injustice."
Spirt of Revolution

The sense in which the word Revolution is used in that phrase, is the spirit, the longing for a change for the better. The people generally get accustomed to the established order of things and begin to tremble at the very idea of a change. It is this lethargical spirit that needs be replaced by the revolutionary spirit. Otherwise degeneration gains the upper hand and the whole humanity is led astray by the reactionary forces. Such a state of affairs leads to stagnation and paralysis in human progress. The spirit of Revolution should always permeate the soul of humanity, so that the reactionary forces may not accumulate (strength) to check its eternal onward march. Old order should change, always and ever, yielding place to new, so that one "good " order may not corrupt the world. It is in this sense that we raise the shout "Long Live Revolution." ( from Letter to editor Modern Review)