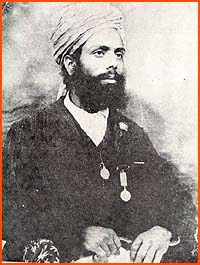 Sardar Ajit Singh Uncle of Revolutionary Bhagat Singh was one of the leader of 1907 Punjab peasantry movement .This was organised with a purpose to repeat an effort of Indian War of Independence of 1857. This had achieved an wide awareness in Military and public.This was done by a spirit so that it is fought with a unity of all casts and creeds . It came to be known as "Pagrhi Sambhal Jatta"; Peasantry of Bar area of Punjab played a vital role. The leaders included Zia ul Hak, Sufi Amba Parsad, Lal Chand Phalak, Ajit Singh, Thakur Das Dhuri and Lala Lajpat Rai. This was one of the people's struggle which succeed in pressing the British Colonial government to withdraw anti Peasantry rules and get released the arrested leaders Ajit Singh and Lala lajpatrai from Mandley (Barma). This is on record that Indian army under British was close to revolt which forced british government to reverse their orders.
Sardar Ajit Singh remained exiled for till March 1947. He played important role in stuggles against British Imperialism in many countries of Europe and Soth America. He breathed his last on 15th August, 1947 at Dalhousie ( now in Himachal Pardesh India)
I am really obliged to Mr.Safir Ramah of Academy of Punjab in North America , for making it possible to have a web publication of Punjabi edition on the Best Punjabi Literature archives of West and East Punjab maintained by APNA.

This book can be read in English at the link
http:
http://www.shahidbhagatsingh.org/index.asp?linkid=7

and in Punjabi (Gurmukhi) at the following link.

Books in Punjabi
( Gurmukhi script)
1. Pagri Sambhal Ton Azadi wal ( Autobiography and speeches of Sardar Ajit Singh uncle of Shahid Bhagat Singh who was in exile for 40years and breathed his last on 15 August, 1947. He was one of leding initiator of 1907 Peasent movement Known as Pagri Sambhal.) http://www.apnaorg.com/books/jagmohan-1/jagmohan.php?fldr=book
2."Inqulab Da Bani-Shahid Bhagat Singh " a biography by Dr Suhinderbir Singh GNDU Amritsar
http://www.apnaorg.com/books/sohinder-1/sohinder.php?fldr=book

Hindi Books
1. Shahid Bhagat Singh Aur Unke Sathiaon Ke Dsatavez can be down loaded from here. Copy paste the link .
http://www.shahidbhagatsingh.org/dastavez/hindibook.pdf
If you want to read one document at a time .Read
http://www.shaheedbhagatsingh.in/hindi.html
Biography book in English
The biography published in May 1931, immediately after execution of Revolutionaries . The most authentic in personal details. This was not only confiscated by frightened British Imperialists but the author was imprisoned too.
http://www.shahidbhagatsingh.org/biography/bio.htm